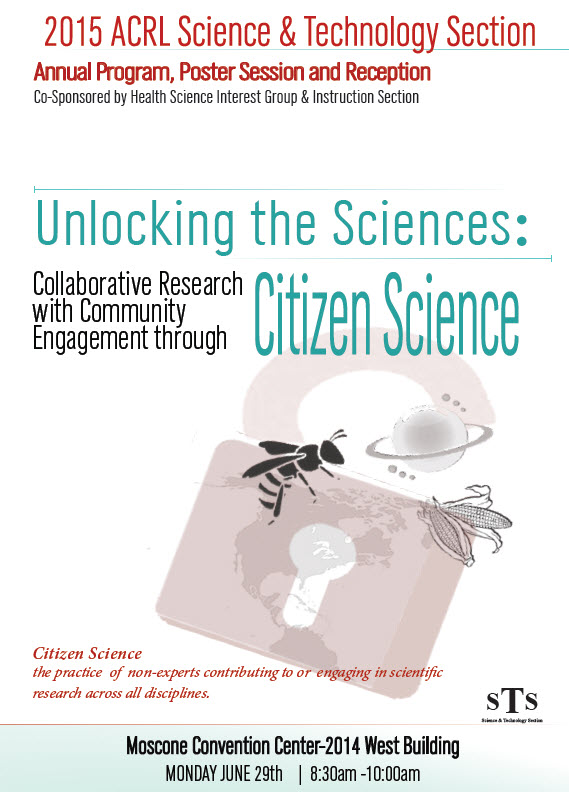 Debbie Currie, MLIS. (slides)
Collection Manager for Agricultural & Environmental Sciences, NC State University Libraries
Has been the Collection Manager for Agricultural and Environmental Sciences at NC State University Libraries
for the past 17 years, during which , her responsibilities have broadened to include outreach support for data
management education and visualization services. Her interest and involvement with citizen science stems from
a visualization project with the NC State Dunn Lab’s “Your Wild Life” program, which explores biodiversity in our
daily lives through citizen science and education projects such as “Bellybutton Biodiversity” and “Meet Your Mites”.
Prior to coming to NC State in 1997, she was the Agriculture Reference Librarian at Louisiana State University for 4
years and was an equine genealogist in the Kentucky Thoroughbred horse industry for 10 years. She has a B.S. in
agriculture and an M.S. in library and information science, both from the University of Kentucky.

Eileen Harrington, MA., MES. (slides)
Health & Life Science Librarian, The Universities at Shady Grove, Priddy Library
The Health & Life Sciences Librarian at The Universities at Shady Grove, previously managed the Naturalist Center
at the California Academy of Sciences, a natural history museum, aquarium and planetarium in San Francisco, CA.
Her book, Exploring Environmental Science with Children and Teens (ALA Editions, 2014) includes a chapter on
citizen science programs in libraries. Eileen has been a formal and informal educator both in the United States and
in Latin America. She has a bachelor of arts in environmental studies and biology from Macalester College, St. Paul,
MN, a master’s degree in environmental studies from York University, Toronto, and a master‘s degree in library
and information studies from the University of Wisconsin-Madison.

Andrew Westphal, BA., PhD.
Stardust@home Project Director, University of California, Berkeley, Space Sciences Laboratory
A Research Physicist and Senior Fellow at the Space Sciences Laboratory at U. C. Berkeley. Received his BA at
Rice University, Russian Teaching Certificate at the Pushkin Institute in Moscow, his M. S. in Aeronautics and
Astronautics at the University of Washington, and his PhD at U. C. Berkeley in 1992 in high-energy astrophysics.
He migrated to planetary science about a decade ago, and since then has been intensively involved in analyses of
the cometary and interstellar collections returned by the Stardust mission. Most recently he was the leader of the
Interstellar Preliminary Examination for the Stardust mission, and is involved in the planning for new missions,
including an new interstellar dust mission and a mission to collect a surface sample from a comet.

STS Thanks the Sponsors Supporting the STS Annual 2015 Program & Events