In recognition of the Sesquicentennial of the Civil War (2011), the 150th anniversary of Lincoln’s election (2010), and the 200th anniversary of his birthday (2009), this exhibit highlights the dangers and controversies that confronted the president.

The University of Florida Libraries announces the arrival of a major national traveling exhibit, “Lincoln, the Constitution, and the Civil War,” to run at the UF Main Library, Third Floor, from  February 1 to March 7, 2012.  Developed by the National Constitutional Center and the American Library Association, this new exhibit focuses on President Abraham Lincoln’s struggle to meet the political and constitutional challenges posed by the Civil War.

Visitors to the exhibit will walk through a series of nine museum-style panels with photographic images of Lincoln, significant historical documents, and prints and photos depicting the era of the Civil War.  The UF Library will open the exhibit on February 1 with a ribbon cutting, followed by panel presentations about the exhibit themes and a reception.  An auxiliary exhibit featuring UF materials on Lincoln and the Civil War will run in the Special Collections Gallery, Second Floor, Library East.

The events taking place around this exhibition are sponsored by the following groups:

Q & A session and reception.

12:00-2:00pm      Young Mr. Lincoln:   A fictionalized account of the early life of the American president as a young lawyer facing his greatest court case.

12:00-2:00pm       Glory!: Robert Gould Shaw leads the US Civil War's first all-black volunteer company, fighting prejudices of both his own Union army and the Confederates.

12:00-2:00pm       The Assassination: This American experience film recounts a great American drama: two tumultuous months when the joy of peace was shattered by the heartache of Lincoln's death. At the heart of the story are two figures who define the extremes of character: Lincoln, who had the strength to transform suffering into infinite compassion, and Booth, who allowed hatred to curdle into destruction.

12:00-2:00pm       The Conspirator: Mary Surratt is the lone female charged as a co-conspirator in the assassination trial of Abraham Lincoln. As the whole nation turns against her, she is forced to rely on her reluctant lawyer to uncover the truth and save her life.

February 29, 2012   Closing Ceremony, co-sponsored with the UF History Department and the Center for the Study of Race and Race Relations, Room 1A, George A. Smathers Library East 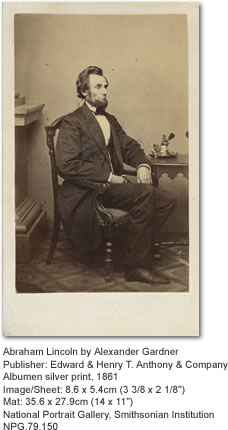 This traveling exhibition is made possible by a major grant from the National Endowment for the Humanities (NEH): The Great Ideas Brought to Life, and was created and organized by the National Constitution Center and the American Library Association Public Programs Office.

This exhibition was obtained with the help of local supporters, including: