The Voyage of the USS Jacinto : Home

An online version of a diary 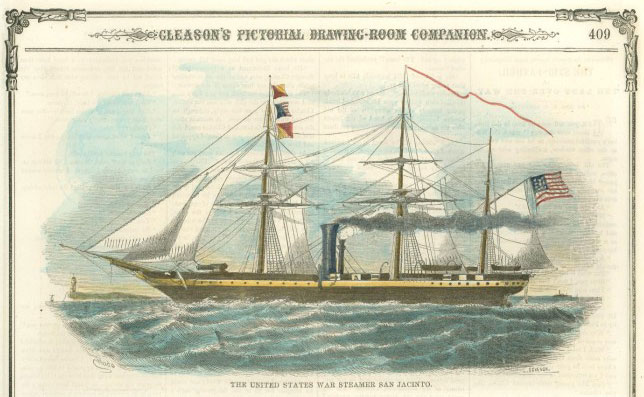 This diary, chronicling a transatlantic voyage by the U.S. steam frigate San Jacinto in 1854 and 1855, was written by one of its junior officers, Louis P. Henop of Philadelphia. Little is known about Henop other that what is revealed in his diary entries. One entry suggests his family came from Norfolk, Virginia. If so, he may be the same Louis Philip Henop (1833-1918) who later in life became a prominent stock broker with the New York Stock Exchange. According to an obituary in the New York Times (June 29, 1918), this Henop was born in Norfolk but lived his early adult life in the North. With the outbreak of the Civil War, his sympathies being with the Confederacy, he joined the southern cause and served as a lieutenant in Whitesides Naval Battalion. After the war, he moved to New York, married Alice Seeley, and had two daughters, one of whom married into the English peerage.

The U.S.S. San Jacinto was an early screw-propellor steam frigate built at the navy yards in Brooklyn, New York, between 1847 and 1850 to experiment with new propulsion concepts. She was named after the Battle of San Jacinto in the Texas Revolution. Problems with her propellors and other mechanical failures plagued the ship throughout her service. She saw service during the Civil War and in 1861 was embroiled in what became known as the Trent Affair, the seizure of two representatives from the Confederacy from off of a British ship. In her 1854-1855 voyage, as recounted by Henop, the ship traveled to England, France, the Mediterranean, the Caribbean, and back to the United States via Key West. Henop describes his excursions to Stonehenge, London, Paris, Gibraltar, Havana, and Key West and also notes the mechanical problems the San Jacinto suffered.  Transcription by Michelle Vega.