Recommended resources for research in criminology and criminal justice.

UF Libraries have a large number of videos available in DVD, VHS, and online. Below is just a sample of documentaries, interviews, and fiction films that examine or demonstrate issues in criminology and criminal justice.

DVDs, Blu-rays, and VHS tapes are located on the Second Floor of Library West. (Click the image below for a larger map.) Many of the titles mentioned on this page are also located at the Legal Information Center and the Education Library. 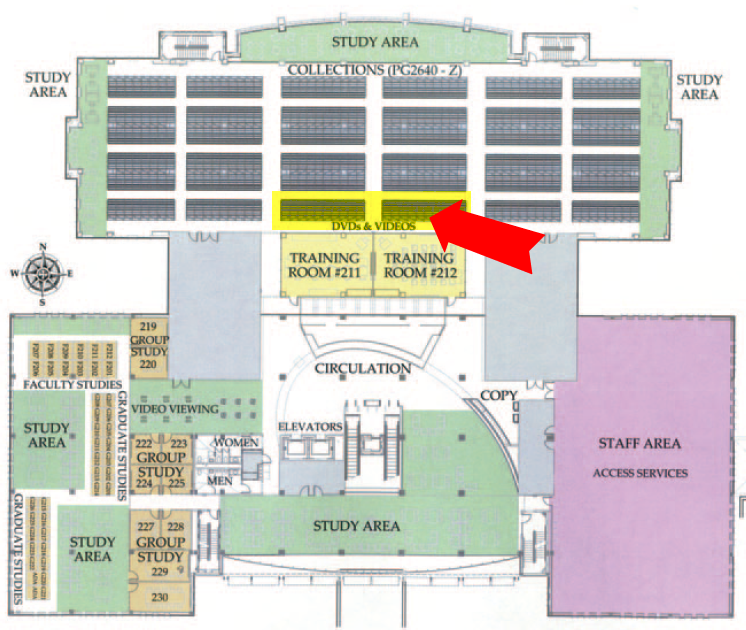 Documentaries
Click on each title to find it in UF Libraries on DVD or VHS.

Concrete, Steel, & Paint. Men in a prison art class collaborate with victims of crime to design a mural about healing.

Hate.com: Extremists on the Internet. An exploration of the people behind websites opposed to non-whites, gays, American government, and others.

Señorita Extraviada: Missing Young Woman. An investigation of circumstances around the brutal murders of over 350 women living along the Mexico-U.S. border.

The Thin Blue Line. (DVD) Errol Morris' investigation of a man who was convicted of murdering a police officer in Texas. (Also in Blu-ray).

Obedience. Stanley Milgram's classic research on obedience to authority through candid footage shot at Yale University in May 1962

Fiction Films
Click on the title of each film to find it in UF Libraries on DVD or VHS:

12 Angry Men. Jurors from all walks of life must decide the fate of a teenage boy accused of murdering his abusive father.

American History X. The charismatic leader of a group of young white supremacists pledges to reform after his release from prison.

Double Indemnity. Walter, a smooth talking insurance salesman, and his mistress, Phyllis, plot the murder of Phyllis' husband for his life insurance money.

M. The contrasting worlds of the police and organized crime are juxtaposed as both groups resolve to hunt, capture, and try a child murderer in a German city.

To Kill a Mockingbird. Lawyer Atticus Finch defends a black man accused of rape in a small Southern town during the Depression.

Special Topic: Intimate Partner Violence
Click on each title to find it in UF Libraries on DVD or VHS.

What's Love Got to Do with It? Chronicles Tina Turner's early years with her abusive husband, Ike.

Once Were Warriors. An urban Māori family struggles to live with their violent patriarch, Jake.

Te doy mis ojos (Take My Eyes). An abusive husband tries to win back the wife who left him by going to therapy.

Defending Our Lives. Features the personal testimonies of four women imprisoned for killing their batterers.

The Burning Bed. The true story of a battered housewife who was acquitted of murder after burning her husband alive.

Power and Control: Domestic Violence in America (streaming video). This documentary follows a woman who struggles to rebuild her life after moving with her daughters to a domestic violence shelter.

The Case for Innocence. A report on why some inmates have not been released from prison after being exonerated by DNA evidence.

Hackers. A report on the exploits of computer hackers and how they have highlighted the Internet's insecurities.

The Meth Epidemic. A look at how and why meth use became the fastest-growing drug abuse problem in America.

The Released. A look into the lives of mentally ill offenders struggling to make it on the outside.