A Tour of the Castillo (Fort Marion) 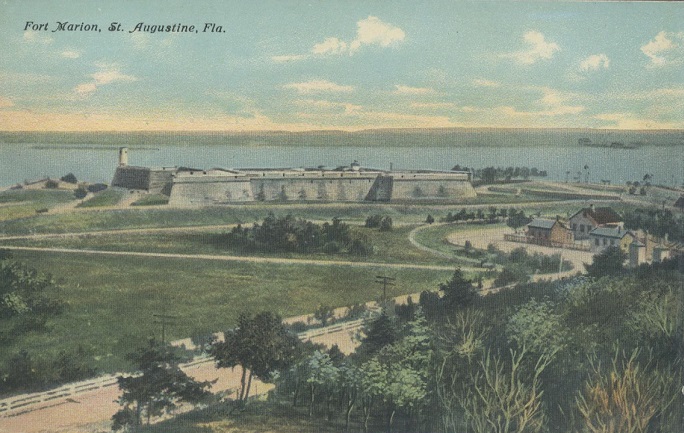 Across the field is the most romantic building in the United States, Fort Marion. This, although now useless under means of defense, is in an excellent state of preservation. Surrounded by a glacis and a moat, the great gray pile seems like a bit of old Spain. It seems impossible to believe that such a building exists within our own borders. This however, is true of all old St Augustine. After walking about the exterior, we crossed over the drawbridge and entered the yard, and were here taken in charge by a guide who admitted us to the principal rooms.

We were fortunate in having him to ourselves and so were relived of chattering companions.  He led us first into the dungeons which were his special delight. These, like the other rooms are built into the heavy walls, but, unlike the other, receive no light save from the modern elective lamps. The first is a high, barrel-vaulted room whose walls and roof are green with fungus growth. From the ceiling suspended a few pencil like stalactites. 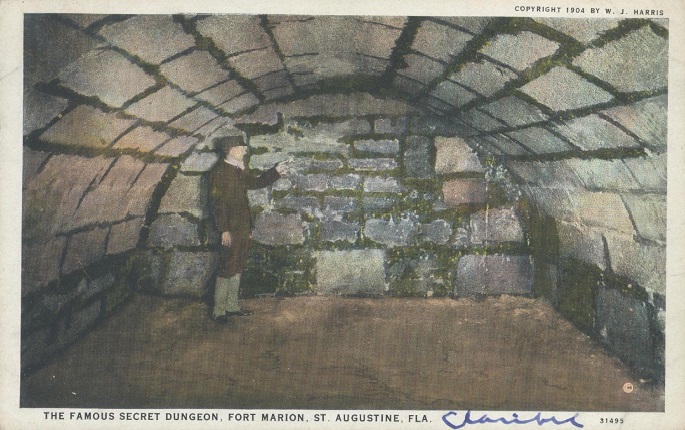 The second room is a tiny chamber which probably served as an ante-room to the third, the torture chamber. The entrance to this is but about three feet high, but the walls are five feet thick. This entrance was sealed until comparatively recently and it was only an accidental breaking in of the roof which revealed this vault. In it were found a rack and other instruments of punishment. In one corner was a hole, three feet across and eighteen feet deep, leading directly to the quicksand. This was probably used for the disposal of undesired carcasses. Chained to the wall, and each surrounded by an iron cage, were found skeletons of a man and a woman, neither of them those of Indians, and neither with any clothing for identification. Our guide dealt with great gusto upon the suffering of those unknown victims and turned off the lights to allow us full appreciation of the stygian darkness in which they must have perished.