Ivar Widing's Drawings of His Solo Voyage to Florida 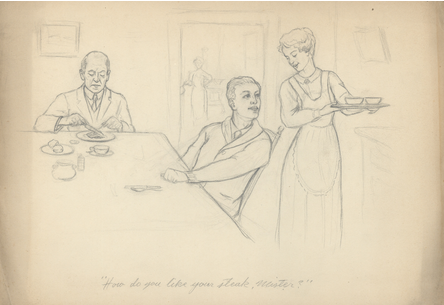 Ordering breakfast at a boarding house in Cohasset, Massachusetts 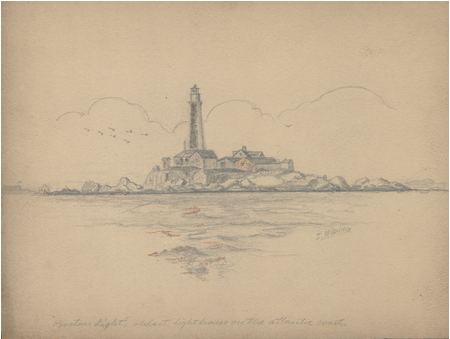 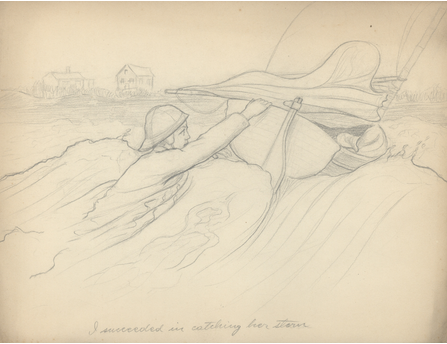 Widing attempting to reach shore because of a storm off the coast of Point Judith, Rhode Island 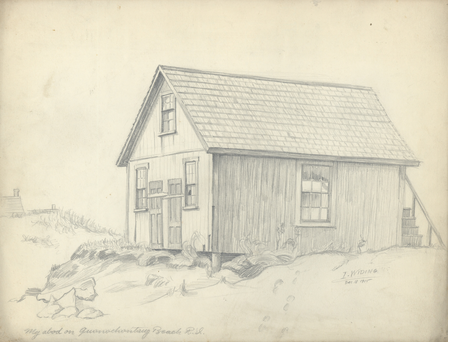 Widing took shelter in a garage that was once attached to a cottage that washed out to sea--Quonochontaug, Rhode Island 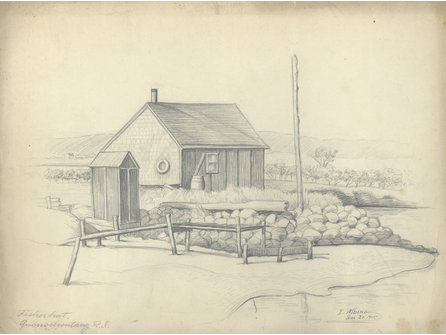 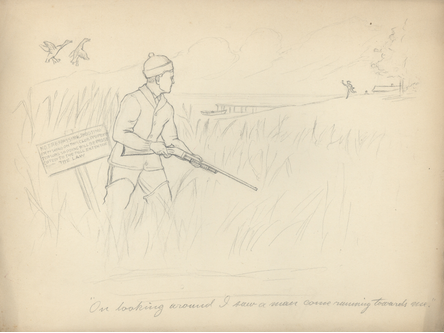 Attempting to hunt ducks on an island in Currituck Sound, Virginia 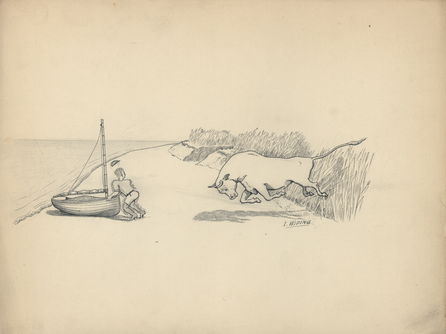 Avoiding a wild bull on the south shore of Pamlico Sound, North Carolina 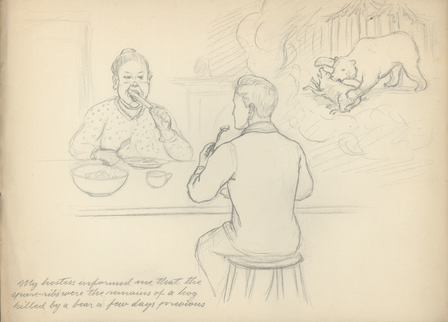 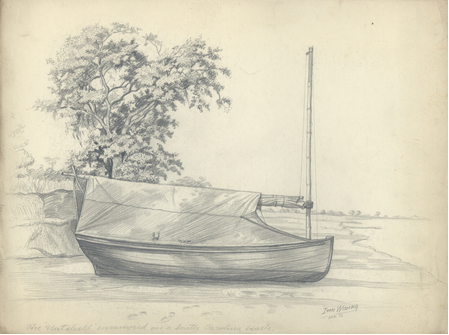 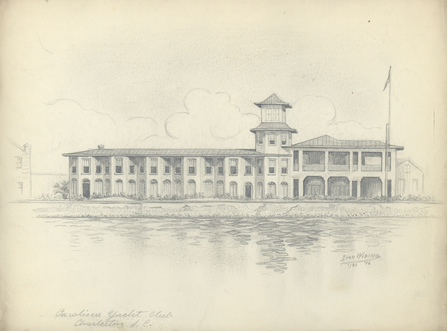 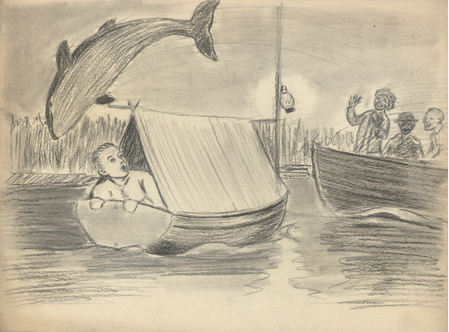 Encountering a school of porpoises in a narrow tributary of the Ashley River, near Charleston, South Carolina 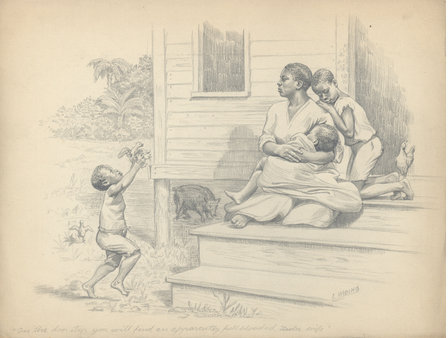 African American family living on one of the Sea Islands south of Charleston, South Carolina 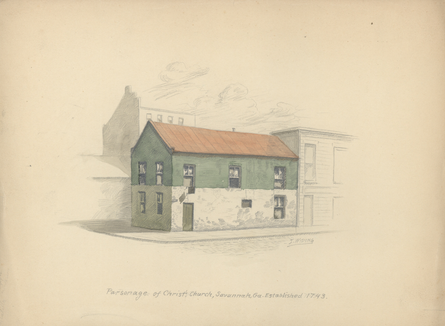 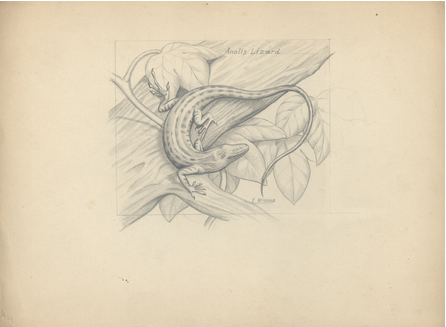 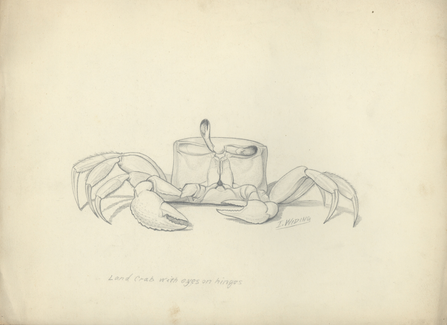 Study of land crab with eyes on hinges 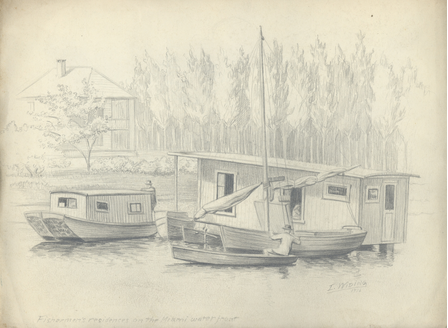 Fishermen's residences on the Miami waterfront 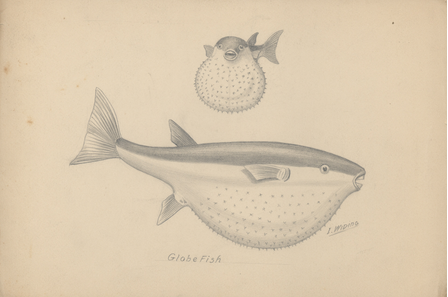 Study of a globe fish 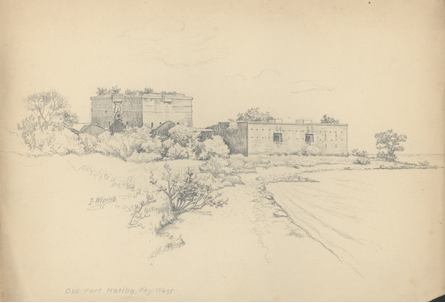 During my two days’ stay in this paradise of the winter tourists, I found a pair of healthy eyes a most valuable asset.

After having seen the most noteworthy points of interest, such as “The Fountain of Youth,” the magnificent “Ponce de Leon and Alcazar Hotels,” “the Whitney House,” which is the oldest house in the United States, built in 1516 by Don Toledo for his Indian bride, I steered through “The Spanish Gate” to old Fort Marion.  Here, while resting my weary limbs on a settee, a well-dressed man entered into conversation with me.  After making a few comments on the glory and wonders of the place, he introduced himself as “Mr. Edwards,” and told me how he had landed in the U.S.A. a poor boy from England, but had in a marvelously short time fought his way to the top, and was now one of Philadelphia’s most successful contractors.  However, of late his health had suffered much from business worries and he had been advised by his physician to spend a few weeks in the south.  He had been in St. Augustine two weeks, and not knowing a soul in the city, had commenced to feel lonely and homesick.  When after fifteen minutes of conversation I showed signs of wanting to depart, he pleaded with me not to leave him, and suggested that we spend the afternoon together, he only being too glad to show me around town and give me a good time.

By this time my friend had, however, made too many breaks in his conversation, not at all fitting such an intelligent and successful man, and I at once stamped him as a “gentleman crook,” so common in all tourist resorts.  But finding considerable pleasure in playing a man at his own game, I accepted his invitation without showing any mistrust in his sincerity.

The Life of Ivar Widing 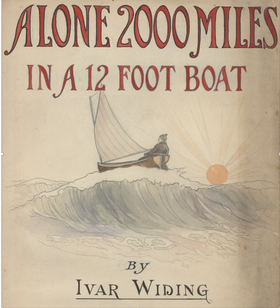 Ivar Widing was born in Stockholm, Sweden, in 1888. In 1905, at the age of 17, he moved to the United States and became a naturalized citizen in 1911.  He worked as an illustrator and was an avid sailor, having been around boats since he was three years old.

In 1915, during a quiet time for his business, Widing decided to sail from Boston to Key West alone in a small boat, called the “Nutshell,” which was only five feet wide and twelve feet long.  He left Boston on December 8 with a small number of supplies.  Each evening he camped on shore, but he occasionally docked in a larger city (such as New York City) where he would stay in a hotel, pick up his mail, and restock his provisions.  The weather during the early part of his journey was poor; at one point, ice in the harbors forced him to ship his boat by rail from Plymouth to Fall River, Massachusetts.  He faced other hazards on the journey, including being chased by a bull off the shore of North Carolina and avoiding robbers in St. Augustine.  He arrived safely in Key West on March 31, 1916.