Florida Diaries: Travelers' Accounts of their Visits: On the Ocklawaha

Paddle Wheelers on the Ocklawaha 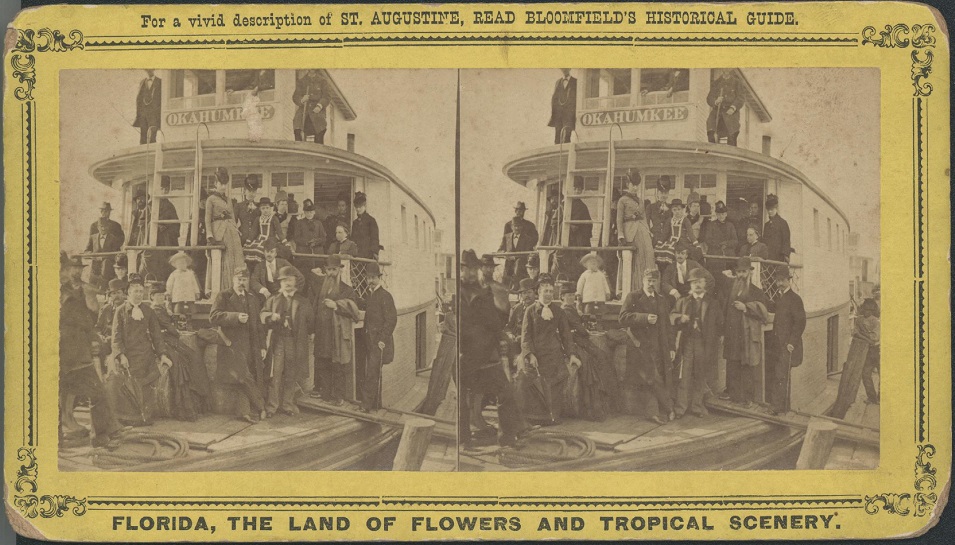 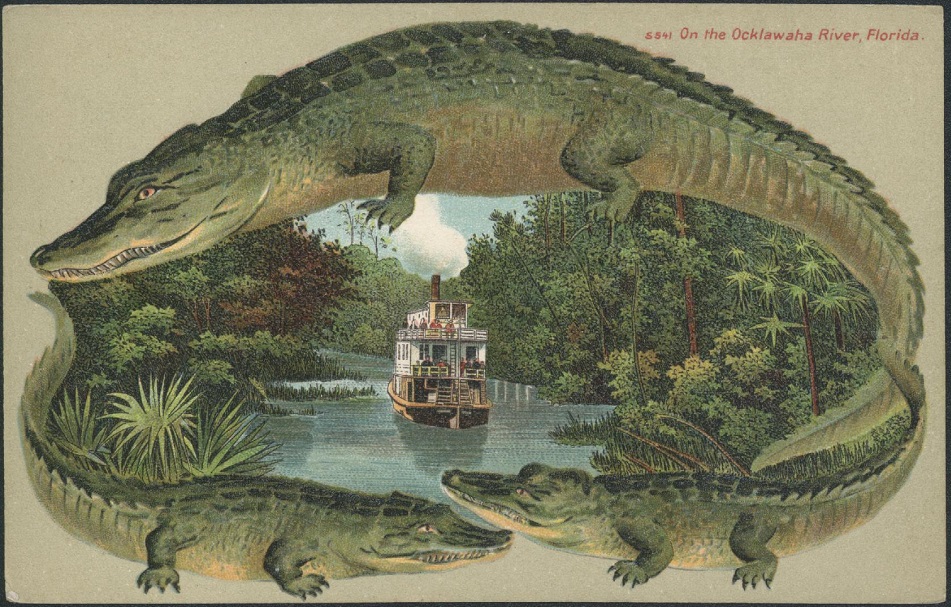 Stereo view of the steamboat Okahumkee (on which the Allens traveled), taken around 1890, and alligator border postcard of the Ocklawaha River, circa 1908.

Martha D. Allen and her husband Charles, of Philadelphia, traveled by rear-paddle wheeler on the Ocklawaha River in 1874, as recounted in Martha's travel journal "The Log of the Okahumkee."  Her journal includes a detailed account of the sights and attractions.  Passengers gathered at the bow to hear a reading of Harriet Beecher Stowe's description of her journey on the river.  They shopped for souvenirs that included alligator teeth and the wings of roseate spoonbills.  And much to Allen's disgust, the men took target practice at alligators swimming near the steamboat.  Like other visitors, a highlight of the trip was the night-time journey on the river, with the stream and banks lit only by torchlight.

"At 6.45 the torch was lit, a fire of pine sticks in an iron stand on top of the Pilot House. This fire was kept up all night. It cast a bright light on the trees, on either hand & for a short distance before and behind us. The effect was very striking. The tall crowded trunks of the Cypress were beautifully illuminated, as was also the drapery of moss that hangs in such profusion from the branches. This gave a sort of enchantment to the scenery and added much to the variety & interest of this unique expedition, giving us a realization of the descriptions of the Ocklawaha. The party spent all the evening before & after tea, on the front part of the boat, that they might have full enjoyment of the weird like voyage up the river."

Hewston Knight Raymenton and Hazel Raymenton took a steamboat trip on the Ocklawaha River during their visit to Florida in 1916.  Like most visitors, they were entanced by the river's narrow and winding course, and by the eerie appearance of it when lit up at night.  In another excerpt from their journal, they also describe the accommodations onboard their paddle-wheeler, the Hiawatha.

"It was dark before we came to the entrance of the Ocklawaha and, as we entered the mysterious stream, a group of electric lights on the top deck were turned on, illuminating the pendant masses of Spanish moss, giving them a ghostly and unreal appearance. In the old days a basket of pine roots was burned and its fitful glare must have given an even more weird effect. The river is exceedingly narrow, so narrow that the branches of the trees scrape the sides of the boat at every turn. This means an almost constant scraping because there are nearly a thousand bends in the river and the longest clear stretch is less than a hundred yards long. The water would at first appear to be sluggish but, in reality, there is a current of five miles an hour. This is attested by the countless little clumps of water hyacinth and lilies which sail merrily along to join the St Johns. These plants have a fibrous, floating, root, and they are independent of any sail. The banks are lined with their colonies and many of the little creeks and bays are completely choked with them. At Palatka we found so many driven against the shores that, at first, we mistook them for a broad field of cabbages or lettuce."