The Archaeology and History of the Alachua and Potano People

Ethnohistoric resources indicate that the Potano people lived in the Alachua County/Gainesville region at the time of European exploration and colonization of what is today known as Florida (see also La Florida). Specifically, the deSoto expedition of 1539 was the first to mention encountering the Potano people, although many other accounts exist from missionaries later in the 16th century. The Potano were politically and linguistically associated with the Timucua, a large polity that lived in what today is known as Jacksonville. Archaeologists researching the larger Gainesville area have identified the Alachua tradition as a precursor to the Potano people, basing this assessment on ethnohistoric documents and similarities in material culture (artifacts), settlements, and land use. The Alachua tradition can be traced back hundreds of years prior to European contact. See the Books from the Catalog section below for more resources regarding the indigenous history of the Alachua County/Gainesville region.

The Florida Museum of Natural History holds collections from a few archaeological sites that are identified as being associated with the Potano people and/or the Alachua tradition. You can reach out to the Associate Curator of Archaeology, Dr. Neill Wallis for more information.

You can browse some of their collections here.

Jacques Le Moyne was a French artist who accompanied explorers Jean Ribault and Rene Laudonniere on an expedition to La Florida (Florida) in 1564. They entered north Florida via what is now known as the St. John's River where the Timucua people lived. This was not the first encounter with the Timucua, as Ribault is thought to have visited the region several times. While there, Le Moyne created various sketches and painting of the Timucuan people. However, the originals were mostly destroyed in a fire at Fort Caroline (Jacksonville). Le Moyne and engraver Theodor DeBry later recreated the depictions from Le Moyne's memory years later, creating speculation as to the accuracy of the depictions. Still, the collection is still widely cited as some of the earliest depictions of Native American life from the continent.

You can view the Le Moyne collection here. 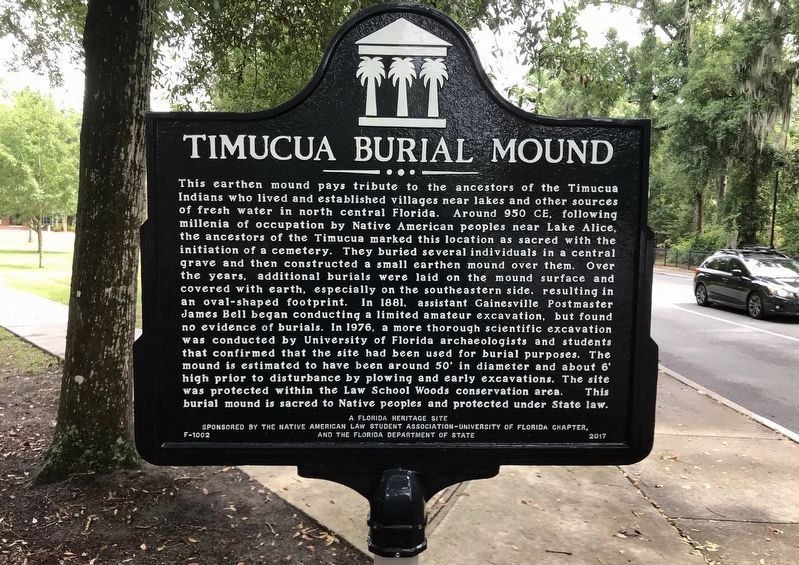 Numerous archaeological sites exist on campus today, many of which are related to the Alachua tradition - the cultural predecessors of the Potano people. The most notable site on campus today is the Timucua Burial Mound, located near the UF Law School. Although the mound was largely destroyed for agricultural purposes prior to the 20th century, remnants of the mound were excavated by UF archaeologists in the 1970s. Their report was published in the Florida Anthropologist 30(4): 166-178.