We are proud to recognize Rachel C. Kirby as the 2019 recipient of the award.  Rachel did her work at the Yonge Library as a doctoral candidate in the American & New England Studies Program at Boston University. Her research examines agricultural imagery that contributed to the creation, circulation, and celebration of identity and place in the American South.   She is tracing pop culture imagery of cotton and rice, and of advertising icons like Mr. Peanut, Bull Durham, and the Florida Orange Bird.

"The orange – in its organic and represented forms – functions as a souvenir for Florida and a proxy for the various promotional associations that the state has embraced over time.  My first section focuses on the time period roughly covering the Great Depression through 1950, as oranges became a major export, and tourists and seasonal residents became an import, so to speak. The second time period is most clearly defined by the lifespan of the Orange Bird (1971-1987). This animated bird was the culmination of the commercialization of orange production and corporate tourism, as he was created from a partnership between Walt Disney Studios and the Florida Citrus Commission." 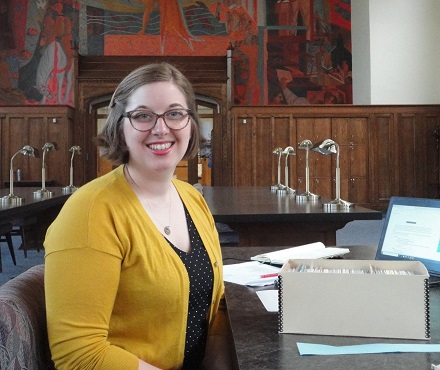 Rachel Kirby, the 2019 recipient of the Chase Family Travel Grant, visited the P.K. Yonge Library of Florida History in June 2019 where she delved into imagery of the orange in our extensive collection of advertising and promotional brochures, in materials from the Chase Family Papers, and in the postcard collection.  We look forward to seeing her dissertation chapter on Florida citrus culture and the iconography of the orange.