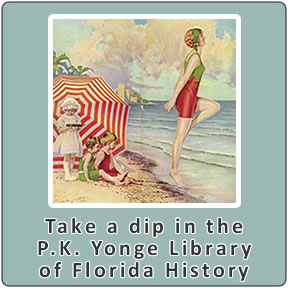 The P.K. Yonge Library of Florida History is one of the state's most important archives for preserving and documenting Florida's past and present.  At the core of the Florida collection is the private library of Philip Keyes Yonge (1850-1934), Pensacola businessman and civic leader, as expanded and built by his son Julien Chandler Yonge (1879-1962).  Julien was already collecting books on Florida in 1892 as a thirteen-year-old.  In the early 1900s he developed contacts with numerous rare book dealers, adding significantly to his family's holdings of works on colonial history.  In 1945 he donated the library to the University of Florida, naming it in his father's honor, and became its first curator.  The P.K. Yonge Library is now part of Special Collections on the second floor of George A. Smathers Library (East).  Its book collection is updated with new acquisitions each year and the library adds maps, photographs, manuscripts, and ephemera as they become available through donation or purchase.

During the 1980s the Yonge Library began to systematically microfilm the colonial records of Florida held at archives in Spain, Britain, and around the United States. As a result it maintains a comprehensive assemblage of documents pertaining to Florida's colonial history.  Microfilm reels are available to researchers at UF and can also be loaned through InterLibrary Loan.

The Yonge Library's collections of original manuscripts and papers is especially strong in 19th-century Florida, the Second Seminole War, the Civil War, Florida politics, and environmental and conservation issues.  Most of the 19th-century manuscripts and Civil War diaries and letters are now available online.

Guide to Finding Books and Materials

Go to the main website of the P.K. Yonge Library of Florida History