The Chase Family Award is made possible through the Sydney O. Chase and Joshua C. Chase Endowment created and supported by members of the Chase family, pioneers in Florida citrus growing.  Its purpose is to enable graduate students to conduct research in the P.K. Yonge Library of Florida History at the George A. Smathers Library, University of Florida.

The recipient for 2020 was Charlie Fanning.  Charlie is a PhD candidate in history at the University of Maryland, College Park, where he is writing a dissertation preliminarily titled “Empire of the Everglades: Agribusiness, the Land, and Labor in 20th Century South Florida.” created by members of the Chase family, pioneers in Florida citrus growing. Its purpose is to enable graduate students to conduct research in the P.K. Yonge Library of Florida History at the George A. Smathers Library, University of Florida.

"In my dissertation project, I seek to unravel the intertwined local and global processes that transformed rural South Florida from a scarcely-inhabited “river of grass” into an expansive agro-industrial complex and hemispheric hub for commodity production and labor migration. . .   I accessed and examined material related to growers’ associations, agribusiness, agricultural labor, and environmental politics from various collections during my week of research. The Chase family, Ernest Graham, Braga Brothers, and Nathan Mayo collections, in particular, have been important to understanding the social and political world of Florida’s major growers, their political positions and associations, and how they operated within and contributed to an environment of increasing agricultural consolidation."

The story of the Chases in Florida began in 1878 when Sydney Octavius Chase (1860-1941), having read about orange groves in Scribner's Magazine, came to Florida from Philadelphia. His brother, Joshua Coffin Chase (1858-1948), joined him in 1884 and together they formed Chase and Company that year.  The citrus enterprise eventually involved all of the family over several generations.

The Chase Family Award was first established in 2009 in honor of Cecilia L. Johnson, granddaughter of Joshua C. Chase, with additional support in memory of Joshua C. Johnson.  The grant program now continues through an endowment created by members of the Chase family.  We gratefully acknowledge their generosity and public spiritedness in supporting this travel grant, which provides $1000 to the recipient to conduct research in the P.K. Yonge Library of Florida History.

Eligibility:  Applicants should be enrolled in a graduate program leading to the masters or doctoral degree and actively engaged in research on Florida history or research that incorporates Florida as a major focus. The award travel grant has funded research in many aspects of Florida history, although applications for research involving Florida agriculture and the citrus industry are particularly appropriate.  Application is open to all graduate students at higher institutions of learning. Preference will be given to students coming from outside of the State of Florida who require on-site access to library materials.

Requirements:  Awardees are required to spend at least one week (five working days) in Special Collections at the George A. Smathers Libraries. One award travel grant will be made annually for a maximum of $1000 to help defray travel expenses.

Applying:  Because of travel restrictions and limited access to collections associated with COVID-19 we are reviewing when to open the next round of applications.  We will make an announcement when we think it will be possible to make awards and also gurantee access to visiting graduate students. For questions or updates please contact James Cusick at jgcusick@ufl.edu. 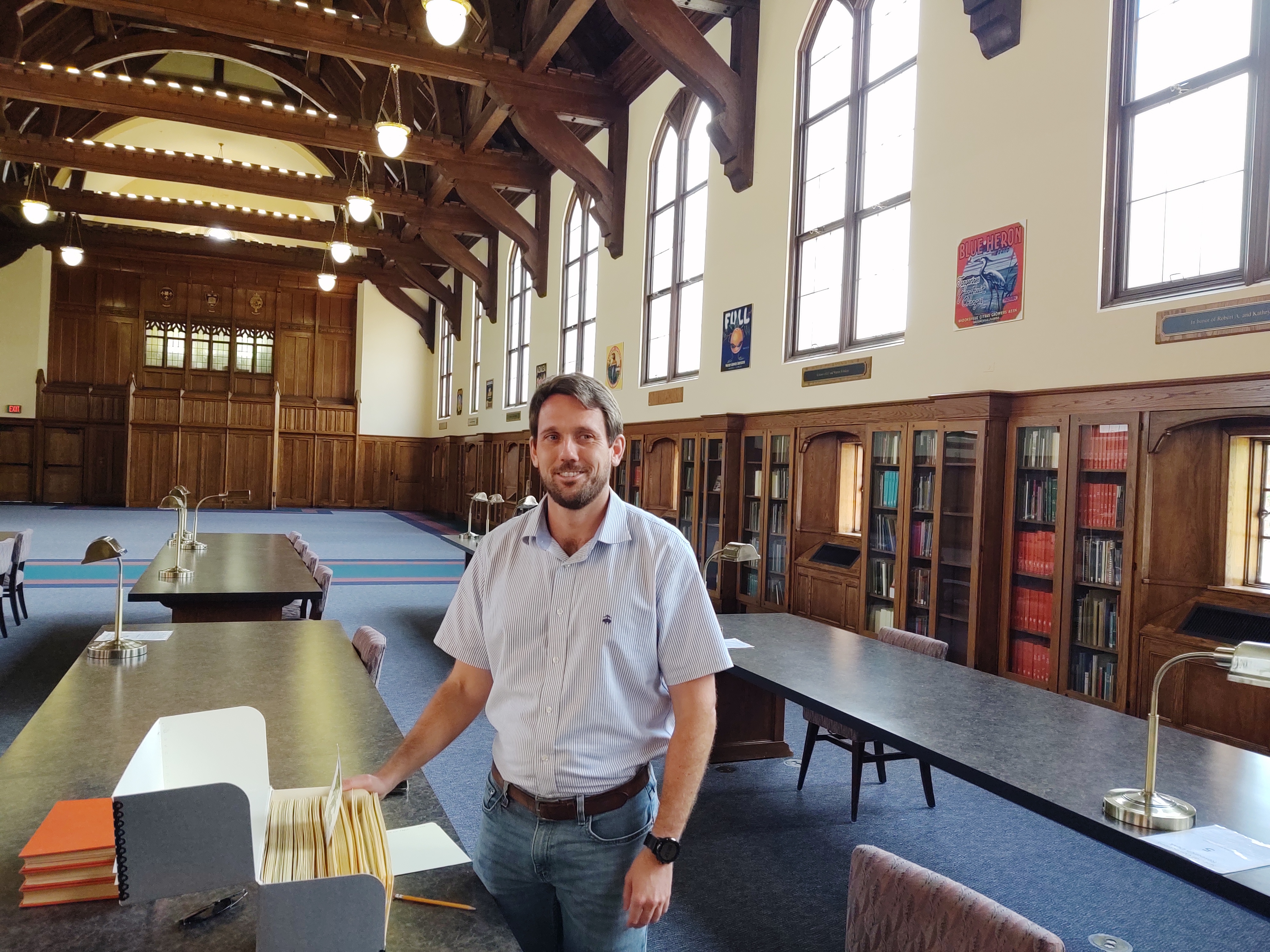 Charlie Fanning, this year's awardee, visited the P.K. Yonge Library of Florida History in March 2020 where he worked extensively in the Chase Family Papers and our publications from the citrus industry as part of his research on the transformation of agriculture in South Florida.  Only a few days after he finished his work, the COVID-19 crisis forced us to close the library to the public!  We are grateful that Charlie was able to safely make his visit and his return home, and look forward to his upcoming dissertation.

Robert Hutchings (Carnegie Mellon) did research on his dissertation Agriculture, Environment, and the Transformation of the Florida Orange Industry in the Twentieth Century (awarded 2014).  He is currently a Program Manager at Cisco Systems

Diane M. Boucher (Clark University) conducted research for her dissertation Networks and Empires in the Maritime Borderlands: East Florida, 1763-1811 (awarded 2014).  She teaches U.S. history at the U.S. Coast Guard Academy and is an independent consultant in historical research.

Cameron Strang (University of Texas, Austin) researched his doctoral thesis on scientific knowledge on the Florida frontier.  Strang is associate professor in history at the University of Nevada-Reno.  His first book, Frontiers of Science: Imperialism and Natural Knowledge in the Gulf South Borderlands, 1500-1850, based in part on research at the Yonge Library, was published in 2018 and won the Summerlee Book Prize from The Center for History and Culture of Southeast Texas and the Upper Gulf Coast (Lamar University) and the Michael V.R. Thomason Book Award from the Gulf South Historical Association.  Listen to a Podcast about his research presented by the Consortium for History of Science, Technology and Medicine.

Christopher Wilhelm (Florida State University) received a travel grant to conduct research on the creation of Everglades National Park. An article based on this research, "Conservatives in the Everglades: Sun Belt Environmentalism and the Creation of Everglades National Park," has been published in the Journal of Southern History. (82:4) 2016.  Wilhelm is  currently associate professor of history at Georgia Coastal College.

Jonathan DeCoster (Brandeis University) received a travel grant for his research into early colonial alliances and rivalries among the native peoples of Florida. DeCoster is currently associate professor of history at Otterbein University, Ohio.  His article "Entangled Borderlands: Europeans and Timucuans in Sixteenth-Century Florida" appeared in the Florida Historical Quarterly in 2013.